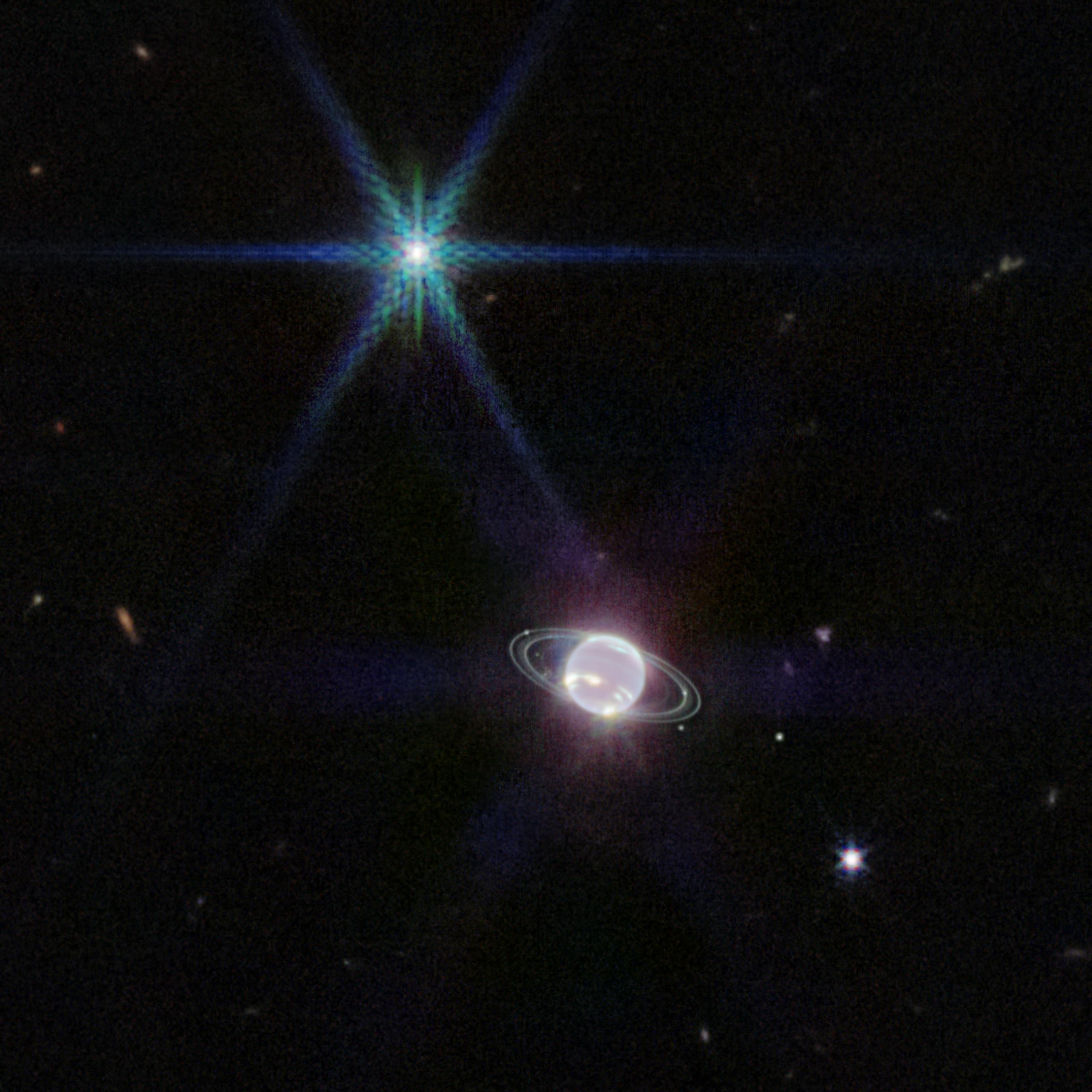 What do we see in Webb’s image of the ice giant Neptune? Webb imaged seven of Neptune’s 14 known moons: Galatea, Naiad, Thalassa, Despina, Proteus, Larissa, and Triton. Neptune’s large and unusual moon Triton stands out in this portrait taken by Webb as a very bright point of light showing the characteristic diffraction spikes seen in many of Webb’s images.
Credits: NASA, ESA, CSA, STScI

NASA’s James Webb Space Telescope shows its capabilities closer to home with its first image of Neptune. Not only has Webb captured the clearest view of this distant planet’s rings in more than 30 years, but his cameras reveal the ice giant from a whole new perspective.

Most striking in Webb’s new image is the sharp view of the planet’s rings, some of which had not been seen since NASA’s Voyager 2 became the first spacecraft to observe Neptune during its flyby in 1989. In addition to several narrow, bright rings, Webb’s image clearly shows Neptune’s fainter dust lanes.

“It’s been three decades since we last saw these faint, dusty rings, and this is the first time we’ve seen them in the infrared,” says Heidi Hammel, Neptune systems expert and interdisciplinary team scientist for the Webb telescope. Webb’s extremely stable and precise image quality makes it possible to detect these very faint rings that are so close to Neptune.

Neptune has fascinated researchers since its discovery in 1846. Located 30 times farther from the Sun than Earth, Neptune orbits in the remote and dark region of the outer solar system. At that extreme distance, the Sun is so small and faint that noon on Neptune is similar to a dimly lit twilight on Earth.

Read Also:   VIDEO. They throw eggs and water balloons at the mayor of Morena in Tlaxcala during a military parade

This planet is characterized as an ice giant due to the chemical composition of its interior. Compared to the gas giants Jupiter and Saturn, Neptune is much richer in elements heavier than hydrogen and helium. This is readily apparent in Neptune’s characteristic blue appearance in Hubble Space Telescope images at visible wavelengths, caused by small amounts of gaseous methane. 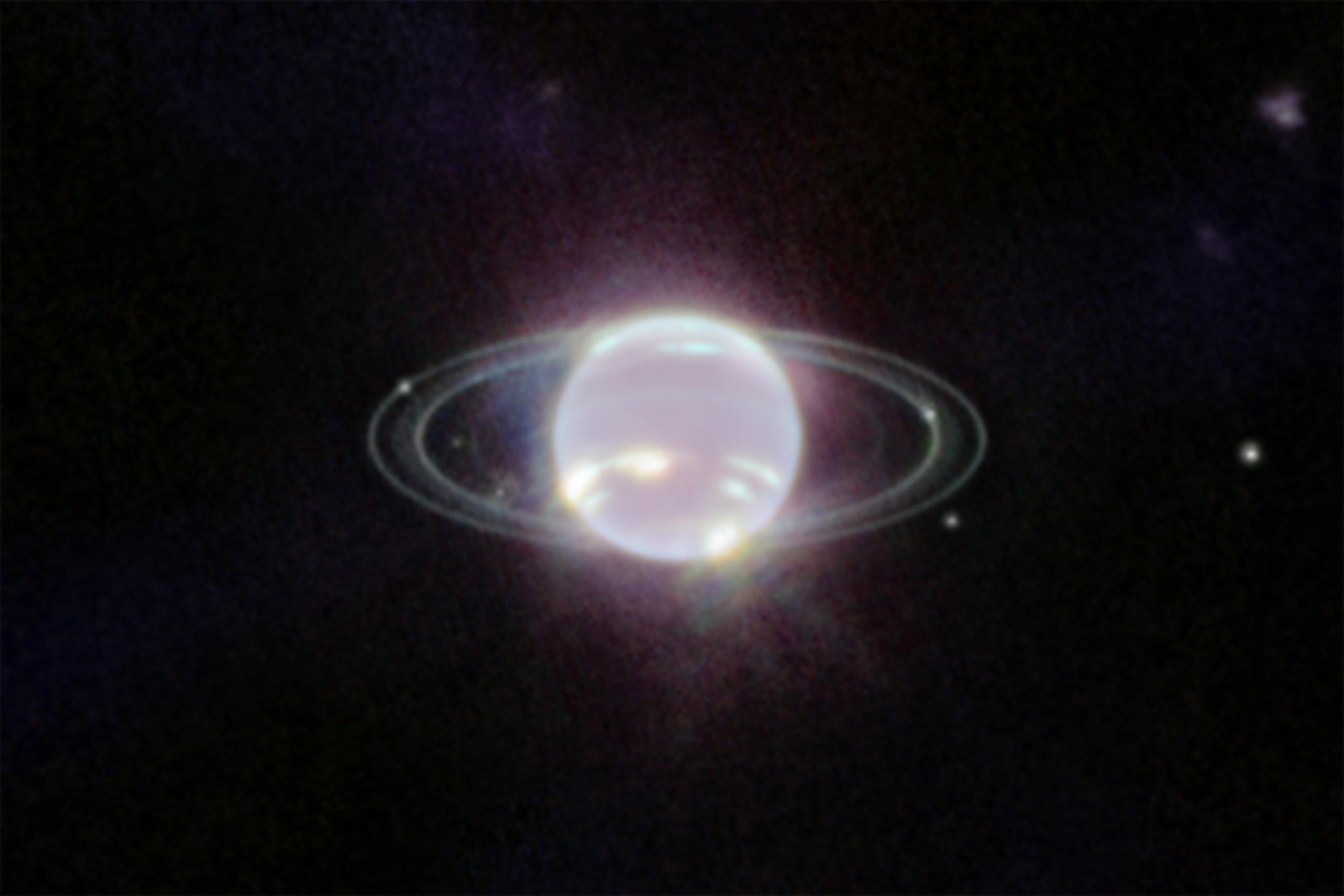 Webb’s Near Infrared Camera (NIRCam) produces images of objects in the near infrared range between 0.6 and 5 microns, so Neptune does not appear blue to Web instruments. In fact, methane gas absorbs red and infrared light so strongly that the planet is quite dark at these near-infrared wavelengths, except where there are high-altitude clouds. Such methane ice clouds stand out as bright streaks and spots, reflecting sunlight before it is absorbed by methane gas.
Credits: NASA, ESA, CSA, STScI

Webb’s Near Infrared Camera (NIRCam) produces images of objects in the near infrared range between 0.6 and 5 microns, so Neptune does not appear blue to Webb’s instruments. In fact, methane gas absorbs red and infrared light so strongly that the planet is quite dark at these near-infrared wavelengths, except where there are high-altitude clouds. Such methane ice clouds stand out as bright streaks and spots, reflecting sunlight before it is absorbed by methane gas. Images from other observatories, including the Hubble Space Telescope and the WM Keck Observatory, have recorded these rapidly evolving cloud features over the years.

More subtly, a thin line of brightness encircling the planet’s equator could be a visual cue for the global atmospheric circulation that fuels Neptune’s winds and storms. The atmosphere sinks and heats up at the equator, and therefore shines brighter in infrared wavelengths than the cooler surrounding gases.

Neptune’s 164-year orbit means that its north pole, at the top of this image, is out of sight for astronomers, but the Webb images suggest an intriguing glow in that area. A previously known vortex at the south pole is evident in Webb’s view, but for the first time Webb has revealed a continuous band of high-latitude clouds surrounding it.

Webb also imaged seven of Neptune’s 14 known moons. A very bright point of light stands out in this Webb portrait of Neptune, showing the characteristic diffraction spikes seen in many of Webb’s images, but this is not a star. Rather, this is Neptune’s large and unusual moon, Triton.

Covered in an icy sheen of condensed nitrogen, Triton reflects an average of 70 percent of the sunlight that hits it. It outshines Neptune in this image because the planet’s atmosphere is obscured by methane absorption at these near-infrared wavelengths. Triton orbits Neptune in an unusual retrograde orbit, leading astronomers to speculate that this moon was originally a Kuiper Belt Object that was gravitationally captured by Neptune. Additional studies with Webb of both Triton and Neptune are scheduled for next year.

The James Webb Space Telescope is the world’s premier space science observatory. Webb will solve the mysteries of our solar system, see beyond distant worlds around other stars, and explore the mysterious structures and origins of our universe and our place in it. Webb is an international program led by NASA with its partners: the European Space Agency (ESA) and the Canadian Space Agency (CSA).

Read this story in Spanish here.

Read Also:   Why does the water pump in a vehicle fail and how do you know when it should be replaced?