The US central bank announced the third consecutive rate hike of 75 basis points, an unprecedented milestone, which indicates that the battle against inflation is far from over.

Investors freaked out after the Federal Reserve (Fed) raised interest rates by another 75 basis points, to 3.25%, and promised to “keep doing it”. The S&P 500 closed down 1.7%, while the 10-year Treasury curve inverted further, with two-year yields topping 4.1% for the first time since 2007. However, its chairman, Jerome Powell, tried to quell speculation about a rate cut, stressing that the policy must be “tight” and stay that way “for some time.”

US central bankers are tightening monetary policy, as inflation remains stubbornly high. The most recent figures show that the core CPI rose 0.6% in August, putting it 6.3% higher than a year ago. Beyond this high level, growing inflationary pressures are particularly worrying. According to our estimates, just under four-fifths of the shopping basket are increasing in price by 4% or more year-on-year.

Y the labor market remains red hotwhich means that there are clear risks that second-round effects on wages and prices cause inflation to take hold. The Fed’s best hope is that more American workers will rejoin to reduce pressure on the labor market. But even though the participation rate rose from 62.1% to 62.4% in August, it is still a percentage point below its pre-pandemic level.

Chairman Powell acknowledged that this “supply tightening” had not reduced inflation, thus further tightening of monetary policy was necessary. He added that he “wishes there was a painless way to leave inflation behind,” but cautioned that “there isn’t.” The Fed’s updated forecasts point to a higher unemployment rate and weaker GDP growth. Even so, they fall short of projecting a full recession, despite the fact that the “dot plot” indicates that rates will rise to 4.4% in 2022 and 4.6% in 2023 (that is, 150 basis points of interest). hardening).

Read Also:   This is the price of cars and motorcycles that do not need gasoline to run

It is optimistic to think that a recession can be avoided and, in the manager’s view, any chance of a soft landing is gone. We believe a recession will be necessary to control inflation and we expect the US economy to contract by around 1% in 2023.

Raising rates to around 4% should be enough to achieve the target, and there are signs that the tightening of financial conditions is beginning to have an effect. All but one of our six monetary recession indicators are in the red. 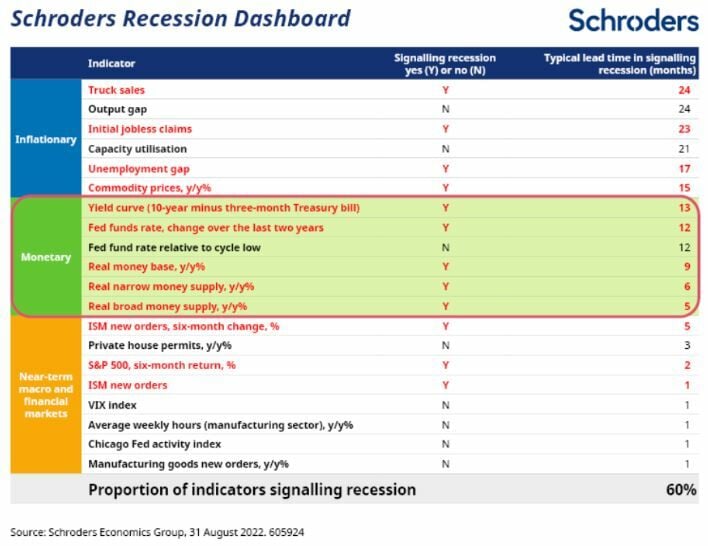 Once the economy is clearly in recession, we would not be surprised to see the focus of policymakers shift back to supporting growth. But any turnaround is probably a long way off. As long as inflation remains inconsistent with the Fed’s price stability mandate, it is clear that the committee will continue to raise rates until inflation is brought back under control.